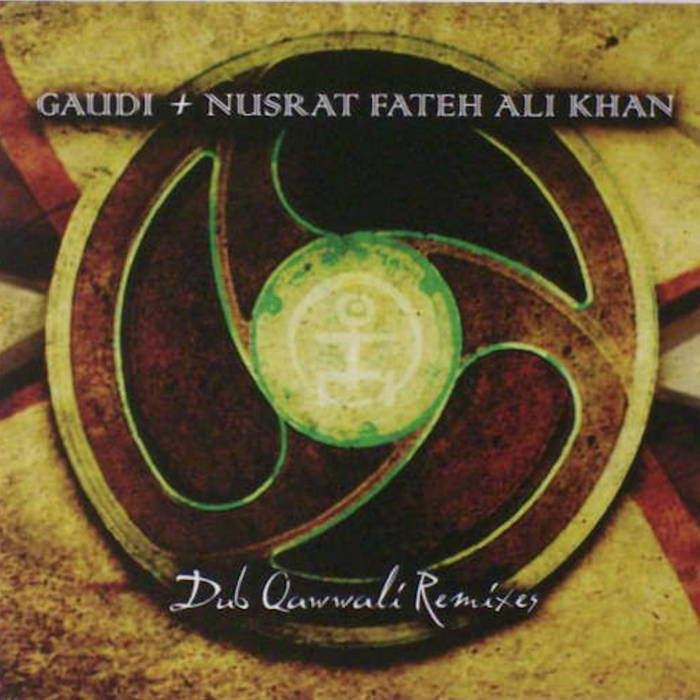 Nusrat Fateh Ali Khan was and is still very much considered to be the greatest Qawwal (singer of Qawwali music) in the world; not only recognized as a legend in his native Pakistan he also took his musical messages of peace, love and spirituality to the international stage, earning him the title of Pakistan’s premier ambassador of Qawwali music. The origins of Qawwali music trace back over seven hundred years to the spiritual Samah songs of Persia and the mystical faith of Sufism.

So, what happens when you unite one of world’s most revered voices with a long-time veteran of global music production? Dub Qawwali, by London-based producer/artist Gaudi reveals the answer. The album blends organic and digital dub stylings with original vocals from Pakistan’s beloved Ustad Nusrat Fateh Ali Khan. The result is a moving body of work that respectfully brings Khan’s Qawwali songs together with Jamaican dub via superb 21st century studio techniques. Dub Qawwali is a celebration of Nusrat Fateh Ali Khan’s life and is being released on Six Degrees Records in August 2007, marking the 10-year anniversary of his death.

Gaudi was one of six producers who were initially offered a single Nusrat track to remix by the Lemon Group – owners of the song publishing of Nusrat Fateh Ali Khan’s works from 1968-1974, in association with Khan’s original Pakistani label Rehmat Gramophone. The company loved what Gaudi had done with the material and offered him complete access to the recording sessions from 35 years ago, including rare and unreleased vocal parts. The original studio reels where sent to Gaudi’s studio in London in 2005 and work began.

Although other producers, including India’s Bally Sagoo and the UK’s Massive Attack, have remixed Khan’s work, in Dub Qawwali Gaudi has taken an entirely new approach to re-interpreting the work of this great artist. He has created a collection of new compositions in which the original vocals are seamlessly fused with a full spectrum of Dub & Reggae styles and musical themes & flavors from other cultures, genres and environments. A universal theme of peace and love, very much evident in both Khan’s work and at the heart of reggae music, is the unifying element.

It was Gaudi’s strong sense of the direct connection between roots reggae music’s humanitarian messages of compassion and love and Khan’s devotional songs, that was a major inspiration in the creative direction of Dub Qawwali. Gaudi is as much a scholar of Khan’s work as he is of Dub, and lists among his favorite dub artists King Tubby, Scientist, Mad Professor, and Lee “Scratch” Perry. After doing studio work with the “eccentric studio genius” Perry in 2005, Gaudi had confirmation of one of his own strongest beliefs in music production which is to respect your own personal integrity by “being yourself and always following your own sound.”

The use of vintage analogue studio equipment and Dub production techniques such as tape echoes, valve amps, Fender Rhodes, spring reverbs, Hammond organ and Moog, characterizes Gaudi’s production style, however it is not without its share of 21st century intervention and wizardry… Individual tracks from the original 70’s multi-track recordings often contained multiple parts together on them. These had to then be carefully cleaned up in order to make them usable in a way that would enable the composition of these new works. (This included much of the vocal parts which where mixed in the same track as the Harmonium and other instruments!)

Gaudi’s attention to detail paid off. Dub Qawwali revives Nusrat Fateh Ali Khan’s vocals in a truly distinctive fashion – a vital accomplishment given Khan’s stature. The legendary Pakistani artist has inspired the likes of Peter Gabriel, Michael Brook and Eddie Vedder and is in the Guinness Book of Records for having the world’s largest recorded output by a Qawwali artist — a total of 125 albums.
released July 31, 2007

This is the remix album, with contributions by: Cheb I Sabbha, Pinch, Bombay Dub Orchestra, Pathaan and Gaudi himself.